After the Sale, what are they doing now

No one can predict the future. Dick would never have imagined that he would almost die while taking a walk by the beach. Thanks to a series of miracles, Dick is still with us today. I called Dick to catch up after working with him ten years ago on the sale of his company. I just wanted to know how he was doing and to my surprise, I learned of an amazing story of miracles and heroes. First, I want to give you some background on Dick and his company, then I will get to his survival story.

On Valentine’s day in 2007 White Fuel sold their assets to Griffith Energy Services. John R. White & Sons Coal Company was started in 1864, when Abraham Lincoln was president. White Coal Company soon became one of the largest distributors of coal in Rhode Island. In the 1930’s Samuel White, added fuel oil as a product and changed the name to White Fuel Company. In 1946 the company was sold by the White family to long time employee Harold Gower. Harold’s son Richard (Dick) returned from College in 1960 and soon took over the company. Over the next forty-six years, Dick grew the business through sales and marketing as well as through seventeen acquisitions.

Dick was also an industry advocate and served twice as the President of the New England Fuel Institute (NEFI). He also helped pioneer the NEFI training school and was President of the Rhode Island Oil Heat Council.

Abbate: “Dick, you were so involved in your business and the industry. What do you miss the most?”

Gower: “You know Steve, I miss the action, but most of all I miss the people I worked with and all the friends I met over the years. I also miss the families of my employees. I loved to see their children and grandchildren grow up. It was really great to attend the NEFI Legends Dinner this year just to see all my friends. They did a fantastic job with the event and they made me feel like a rock star.”

Abbate: “Do you have any regrets about selling?”

Gower: Actually I felt like I found a great company to sell to and I could continue being involved as a consultant. It enabled me to ease out and play more golf.” Not everything worked out exactly as planned but for the most part I was very pleased and so was Ellen.

Abbate: “So what have you been doing with yourself?”

Gower: After we sold, I loved to go to my farm and then down to Vero Beach in the winters. I built stone fences around the farm, and worked the farm until my arthritis got bad. I’m down in Vero most of the time now. Until May 4, 2015 I took a daily 2-mile, pick-up-the-trash walk with my trusty hand-hewn cane. I set my trusty cane into what turned out to be the very upper, untrusty, portion of the embankment. It sank in more deeply than I anticipated, I lost my balance, and from that second on, I have no recollection of what happened. 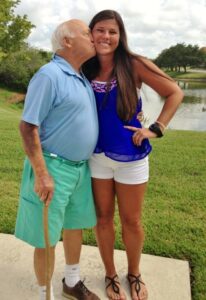 Thanks to Tori Cotton, pictured with Dick, and several other heroes. Dick’s life was saved after falling into a canal and sinking to the bottom. 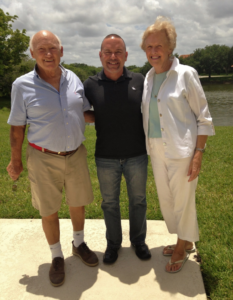 Abbate: “What advice do you have for owners considering a sale?”

Gower: “Do it sooner rather than later to enjoy your life.”