One of my favorite card games that I play with my family is Fact or Crap. If you never played, it’s fairly simple. One person picks a card, reads it and the other players state if they think the statement is true (Fact) or false (Crap). I thought it would be helpful for this article to play the game. The answers are throughout the article so you have to read the whole thing to find them.

Are these statements Fact or Crap?

There is no public information on the fuel used to heat Graceland but some of the heating bills were probably paid for by the one and only commercial Elvis ever made for Southern Maid Donuts.

I recently attended the annual spring trade show circuit and everyone was talking about the warm winter. At two of the business programs I attended, panelists referred to this past winter as the warmest on record. It did not seem correct to me so I went to my degree day records to check. We use degree day records to normalize weather for financial analysis and for presenting businesses.

It is important for an energy marketer to understand how the weather effects their business. Sure, we know warm weather means less heating fuel sold and cold means more, but how much more or less can help you understand your business better. When analyzing the health of your business it is important to know if you have a stable customer base, and one of the ways to tell is by weather normalizing your gallons. You need to measure your business to manage it or you could be barking up the wrong tree like the small Mexican dog named for a major commercial center in the northern region of the country.

It certainly felt like the warmest winter in recorded history but our statistics show it was not. I looked at the calendar year, July to June and even the months of December-April and all proved out to be warmer than normal but not as warm as it was just a few years ago in 2011/12. The most acceptable way to measure weather is by counting degree days. Some analysts compare degree days from the previous year based on gallons delivered per degree day or by using a 30-year average. We prefer to use a 10 year average. The 10 year average is used by many companies selling weather insurance. All methods are acceptable as long as it is consistent from year to year. The following charts are an average of seven cities in the Northeast and Mid-Atlantic regions of the country. 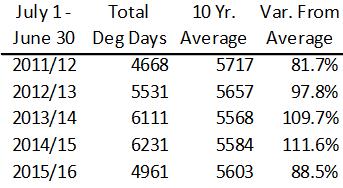 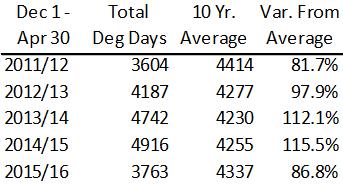 Comparing the last two winters we saw an almost 30% swing in winter degree days from year to year. That might drive you to drink, and if you do, you may want to have a drink at the Tun Tavern in Philadelphia where the US Marines were founded in 1775. The degree day math is not hard although talking Barbie told children it was in 1992. What is hard is understanding how to plan for the elusive normal winter.